Music at Tutankhamun exhibition 'inclined me to violence' 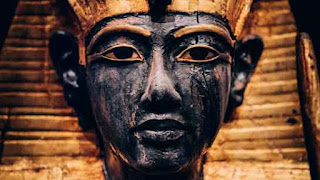 "In fact, it was a West End musical. Yes, this show has music.And yes, it is dreadful. Think of the stuff they play in spas while giving you a massage. It is intended to be relaxing, but its meandering, unresolved tinkling tenses every muscle in your body. It inclined me to violence and certainly shredded my capacity for contemplation."
Posted by Quiet Scotland at 11:43 No comments:
Email ThisBlogThis!Share to TwitterShare to FacebookShare to Pinterest

There is a well-known expression, “What you don’t know, can’t hurt you”. True of some situations, perhaps, but certainly not true when it comes to hearing damage from loud music.

There have been many well-documented cases of singers and instrumentalists revealing the damage that a lifetime of performing in a band has done to their hearing. One famous example is Pete Townshend of the Who. “I have terrible hearing trouble. I have unwittingly helped to invent and refine a type of music that makes its principal proponents deaf”.  Eric Clapton, Chris Martin, Ozzie Osbourne and Barbra Streisand have also blamed exposure to music on their current hearing problems.

Many people will say that individuals like Pete Townshend and Eric Clapton have spent their lives immersed in loud music. “It’s not going to affect me. I only go to the occasional gig”. Unfortunately, this is not the case. There are many, less well-documented, cases of people suffering permanent hearing loss or tinnitus after just a handful of very loud concerts or exposure to loud music at something as innocuous as a gym class.  Nathaniel Ernest struggled to sleep after getting tinnitus from a gig when he was 18 and Christine Reiners blames her hearing problems on blaring music at her exercise class.

It is not easy to sue a concert provider for your permanent hearing damage. You know that the symptoms occurred immediately after their concert but it is your word against, usually, a very powerful organisation. And, as we've already mentioned,  it’s not just concerts that can affect you. Background music in restaurants, bars, gyms and even shops can reach dangerously high levels. There is an ongoing law case - Victoria Secrets v Erik Maran  where Erik Maran is claiming that a loud blast from a speaker at a fashion show in Victoria Secrets led to his hearing loss and tinnitus.

Organisations have a duty to protect their own staff from dangerously loud music. Once the decibel level hits 85 dB for more than 15 minutes, they are obliged to issue their staff with hearing protection under the Control of Noise at Work Regulations 2005  However, they have no legal obligation whatsoever to warn the audience at concerts (often pre-teens and teenagers), where the decibel level is often in excess of 110 dB, or customers in restaurants, bars, shops and gyms, that the volume of the music can cause permanent damage to their hearing.

How can we make people aware of the dangers?

There is no way that Quiet Scotland wants to see a nanny state imposed. However, we do feel that everyone, not just concert-goers, should be warned of the dangers of loud music. Many people have no idea that just a few evenings of loud music could result in permanent hearing problems. The BBC often hands out hearing protection when it is playing music in excess of 85 dB at its events. Why doesn’t every event organiser do this? Or even the owners of very loud bars and restaurants?

It isn’t just music events, shops, bars, gyms and restaurants that present a danger to our hearing. Hugh Grant recently complained that his experience of watching ‘The Joker’ in his local Vue cinema was “unendurable” because of the noise volume. This resulted in an enormous response on social media, mostly supporting Hugh. However, Eddie Harrison, the Scottish film critic, disagreed. The majority of people, he said, want to be “blown out of their seats” by the “blistering noise”.

Do they? And, even if they do, have they any idea of the damage this can cause to their hearing?

It is heartening to see that the National Centre for Environmental Health in America have issued a new educational comic book, “How Loud is Too Loud?” which is available online. Hopefully, the next generation will have the facts at their fingertips and be able to educate those who are currently putting our hearing at risk.

As they will be only too well aware, “What you don’t know, CAN hurt you”

Walking quietly around a gallery or historical location, enjoying looking at the exhibits and reading about them, your ears are suddenly assaulted by music or loud booming voices. Someone has pressed the button for audio, and not only do they hear it, so do you and everyone else in the room, for as long as it goes on and often into the next room and beyond. Finally it fades. Then someone presses it again, and all hope fades of being able to concentrate.

A number of museums and places of interest provide personal audio devices to take around with you, but many do not. Instead, there are buttons to press (a magnet for children, usually repeatedly) or a constant background of sound effects 'appropriate' to the exhibition in question. What does this add? We know what a storm sounds like, or gunshots, or a marketplace. We don't need to hear a letter read out, we can read it ourselves.

This blog is the place to look for up-do-date news about our campaigns and the issues that affect us. Feel free to post a comment on any of the articles in the blog.